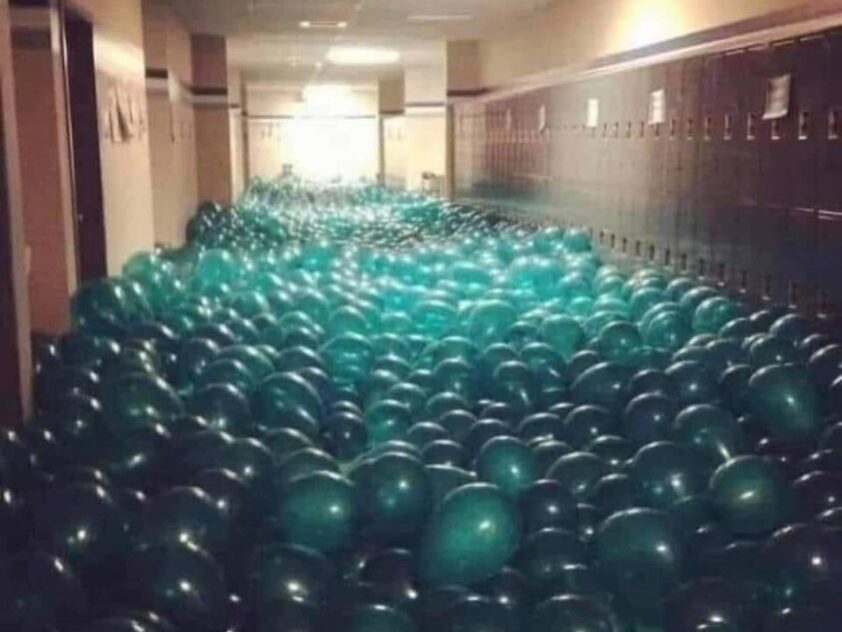 “A professor gave a balloon to every student, who had to inflate it, write their name on it and throw it in the hallway. The professor then mixed all the balloons. The students were given 5 minutes to find their own balloon.

Despite a hectic search, no one found their balloon. At that point the professor told the students to take the first balloon that they found and hand it to the person whose name was written on it. Within 5 minutes everyone had their own balloon.

The professor said to the students: “These balloons are like happiness. We will never find it if everyone is looking for their own. But if we care about other people’s happiness ….we’ll find ours too.”

Just had to start with some feedback on this aspect which was exact last Thursday morning. It was a reminder to me that these major aspects can build up at least a day in advance and last a further day beyond the point of exactitude. And also proves the point about Uranus aspects being unpredictable, as am often saying they really can swing either way –

The last course of the Summer School finished on Wednesday and, after three weeks of intense work, I had the usual and natural reaction of exhaustion, but in the nicest possible way! I waved off the last group and then went straight home with the intention of starting the clear up of my study, always littered with handouts and charts etc at the end of courses, only to stop in my tracks with a message from my best friend here Trish who said enigmatically, Call me! I have plans for us.

I was whisked away to a lovely hotel out of Nidri and treated to lunch, a pedicure in the spa and an afternoon by the pool. We had to laugh, this idyll was somewhat disrupted by a rowdy group of guests, yelling to each other from distances and playing their own loud music over the music that’s piped through from the bar. Somehow they thought that this was acceptable – until I complained!

The next day I went to meet Trish for the usual swim at the place we’ve been using all summer and stopped to buy flowers for the owner who had been ill for a few days, from exhaustion. We presented her with the bouquet and she was touched beyond words and one of the bar staff also burst into tears.

Trish then went for her purse to pay me her half, only to find it was missing. Panic. It included her bank cards and Greek driving licence that she had only just replaced after having her handbag stolen from her car earlier in the year, a shock in itself as we pride ourselves here on being crime free.

We went out to her car, no purse there or on the road. But she handed me a carrier bag of shopping she’d done for me, two large bottles of my favourite fabric conditioner (Venus!) that I can’t get locally. As we walked back into the taverna I thought the bag was going to break, and looked down – and then found myself on the pavement. I’d walked straight into the awning over the entrance and nearly knocked myself out. I have whiplash but am otherwise okay, and Trish found her purse at home. You probably feel exhausted just reading all of that!

Here we go again, Mercury turns retrograde three times a year for three weeks at a time. This year it’s been the turn of the air signs. Mercury was retrograde –

Mercury has only just made aspects to Jupiter and Pluto so this turnaround also means that he’s heading straight back to repeat these aspects for the second time, on Friday and then just as we tip into next week –

Mercury will of course come back to repeat these aspects for the third and final time after turning direct again, and final aspects are usually about closure. These middle contacts are also important as they loop us back to issues that we thought were sorted/decided or which require a long period of work or negotiation, or a lot more information or discussion than we at first expected. The whole sequence takes about six weeks –

In particular look out for Jupiter (the Greater Benefic) themes – education, travel, the law, publishing, opportunities of any kind or anything that is likely to make your world bigger and better, the presence or importance of foreign contacts.

These are all up against Pluto themes – control, power, absence, endings or loss, adapting to change – and presented in Libran wrapping paper. Libra is THE sign of partnership, as the Scales symbolize equality and how whatever one side does affects the other, and is also linked to prevarication. So if you’re having problems with decision making that’s no surprise, and it’s definitely not the best of times to give into pressure, but decisions may be made for us if we don’t exert our own will.

A friend has just contested a will. Without going into the whole story she had to seek legal advice (Jupiter) and she couldn’t overturn (Pluto) the will but considerable benefits came out of the advice and instructions from the solicitor.

Finally on this subject, note that both Jupiter and Pluto are SD – Stationary Direct – as both are now appearing to be at a standstill as they end their long backwards loops and prepare to start moving in the right direction again –

Aspects to these two planets therefore take on even more weight and significance as they reflect events that mark the unfolding of major turning points. In the middle of these Saturn will also turn direct 11 October, and I’ll be talking more about these cycles in the coming weeks.

But for now while the big guys get ready to move forwards again Mercury is going the other way. So it would appear that this particular retrograde Mercury period is going to reflect the learning curves or even chaos that generally precede big changes, in addition to the usual expected issues – checklist at the end of the blog. I’ve just seen an astrologer’s post about “Retrograde Mercury Magic” but I would personally substitute the word “Mayhem” – we’ll see!

The other key planet this week is Venus, making a series of aspects as she finishes her annual  journey through Scorpio, one of her signs of “detriment” –

Again we have personal planets picking up aspects to slower moving planets – Jupiter, Saturn and Pluto – getting ready to turn direct. This adds to the picture that is increasingly linked to transitional themes. Relationships are high up on the list with both Venus (love) in a lead role and Mercury turning around in Libra, Venus’ sign. Authentic negotiation is crucial, whether it’s about housework or how to split up!

The Venus – Neptune is obvious for me as this evening I join my friends on a boat, to celebrate Maggie’s life, a very dear friend who passed on 12 July, and to scatter her ashes in the Megannissi channel. This ceremony has been delayed because of covid/travel issues and the massive heatwave, but we can now all come together, which we couldn’t do for her actual funeral. Maggie was a Scorpio, Neptune rules grief as well as being the god of the seas, the weather is now spectacular and Maggie, who loved sailing, will love that her final resting place will be in these beautiful waters.

The healing power of ritual will play a big part in the onwards journey for those she left behind, especially her husband Martin. Nothing ever prepares any of us for grief, and I don’t believe that there is any final version of emotional closure when it comes to bereavement, but all ceremonies are another step on the journey. The Venus – Pluto aspect links to this as Venus is in Pluto’s sign and this is Venus’ last aspect while in Scorpio.

Also remember that we still have the mutual reception between the love planets Venus and Mars as they occupy each other’s signs, and will do until Venus enters her next sign of Sagittarius next Thursday. This indicates the power of mutually beneficial arrangements and exchanges – hence the choice of quote for this week, which I’ve seen several times on Facebook, but don’t know its original source.

until next week, love from Greece