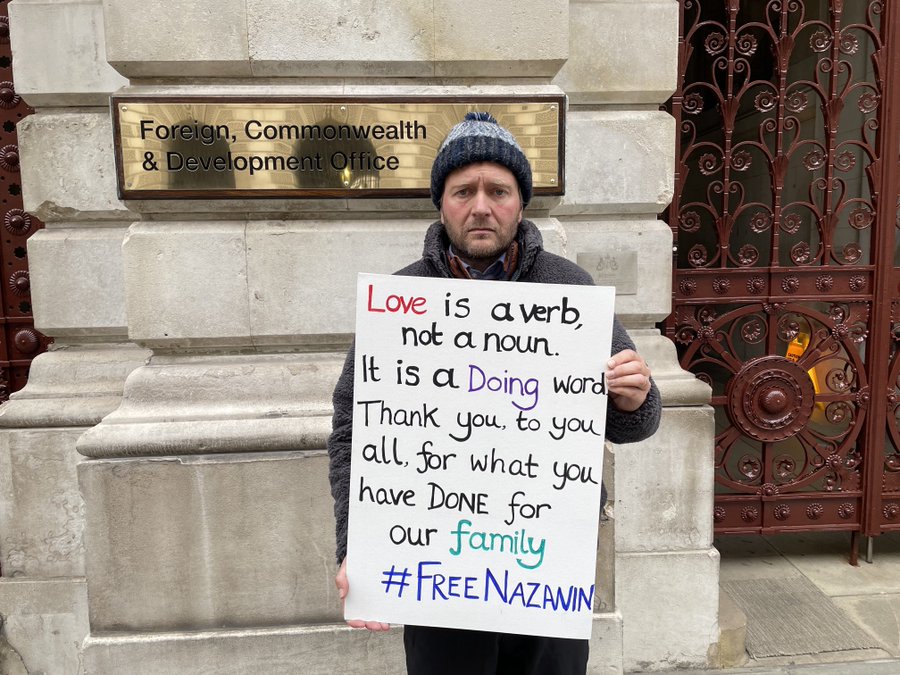 “Love is a verb, not a noun. It is a Doing word. Thank you, to you all, for what you have DONE for our family. # FREE NAZANIN.”

“If you think you are too small to make a difference, try sleeping with a mosquito.”

I often get feedback from blog readers but last week brought more than usual. This often happens when we’ve had difficult aspects going on which rather bears out what I always teach – don’t glamourise the heavy stuff, don’t be a “good news” astrologer. Nobody wants to be told that everything is just fine when it isn’t. We can go to our friends for tea/wine and sympathy but when someone comes to an astrologer it’s to get at the truth.

Last Wednesday we had Mercury playing into the tough Mars in Scorpio square Saturn in Aquarius, the two “malefics” aligning by a stressful aspect in Fixed signs. That was never going to be anything nice! In terms of general mood I heard the words forlorn, pissed off and murderous. From delays, disappointments to mishaps, on that day these were some of the reported events –

In the news, a lot more about lockdowns in Europe. As I said last week Mars is the god of war and speaks of action, Saturn by square speaks of blocks and obstacles, eg Covid restrictions. Denmark, Germany and Holland are all in the news with their plans for at least partial lockdowns. I even read somewhere a “lockdown-lite” – what next?!

A lot of events seem to fit with the Race (Mars) against (Square) Time (Saturn, who is Lord of Time), in particular –

As it dragged on, trying to hammer out climate deals at COP26 was never going to be a win-win situation. Inevitably there are criticisms and disappointments, not least for COP26 President Alok Sharma, who said it was important a deal was done – but fought back tears as he spoke about the watering down of a commitment on coal. A last minute change to get the deal done involved giving in to India and China on “phasing down” instead of “phasing out” coal.

Was it a success? Bojo says it was – which means it probably wasn’t – but that there’s a lot of work yet to be done – ie don’t hold me to any of this as I already have my get out clauses.

And another Bojo legacy from when he was Foreign Secretary goes on and on … Richard Ratcliffe’s race against time hunger strike – heroic (Mars) and drastic (Square) denial (Saturn) of sustenance to draw attention to the ongoing detention of his wife Nazanin in Iran on trumped up charges of “plotting to topple the Iranian government”. He put himself at serious risk (Saturn also rules death) and after 21 days the hunger strike ended on Saturday night when he started to develop warning symptoms. His point was made, and Nazanin is back in the headlines.

Change.org has a petition to sign – it literally takes a second to do this – that now has 3.7 million signatures with a goal of 4.5 million, which would put it at the top of the most signed campaigns.

I don’t usually include interactive links but with the looming Lunar (women) Eclipse and the Total Solar Eclipse two weeks later at 12 Sagittarius, exactly conjunct Nazanin’s Mercury (the Winged Messenger in the sign of justice/overseas) this is timely. (Born 26 Dec 1978 but no time of birth recorded)

Please do sign and, even better, share. If nothing else Covid has taught us about exponential growth so every time this is shared on social media it can reach thousands more people, and this is also what made me think of the Dalai Lama’s quote at the top of this week’s blog –

I think we can safely say that this is going to be a busy week, or one that’s “full on” in terms of any matter currently important to you. This will apply especially if you have personal planets or Angles at or very close to the degrees and signs involved in this week’s aspects.

Happily, of the 7 personal planets (Sun through to Saturn) all of them feature this week but Saturn is notable by his absence. Hurray. The three outer planets Uranus, Neptune and Pluto also all put in an appearance.

This is rather rabbit in the headlights stuff. Where do we begin? Firstly it’s very important to put a substantial part of this week’s activity into the framework and perspective of the bigger picture. So this is how I would regroup these events, starting with the Sun and Mercury who are both making the same aspects but at either end of the week –

In other words, what unfolds at the beginning of the week is likely to have further ramifications for the end of the week. The Solar aspects can light a fuse that will blaze a trail towards finding real answers or making informed decisions. Health issues may also figure in this as the Sun is our life force and vitality. Matters of power and control (Scorpio) are also crucial. There may be links back to the end of last week when the Sun was trine Neptune and Mercury repeats that aspect too.

Secondly, these aspects also remind us that Jupiter and Pluto (Scorpio’s planets) themselves are travelling alongside each other, aligning exactly in a series of three minor aspects. They are slow moving – Jupiter (12 year cycle) and Pluto (248 year cycle) – and both loop backwards and forwards for long periods of time, so the first aspect was in April, the second one was in September and the third and final one will be at the end of next week –

This combination isn’t easy but it’s pretty clear what it’s been about in terms of wipeout Pluto cancelling out Jupiter’s wide ranging concerns, such as freedom, travel and optimism. But it has at least been a minor aspect – this is not the total nuclear consequences of last year when Jupiter and Pluto were conjunct, airlines went bust and total lockdowns lasted for months – and it’s approaching a finale.

At a personal level whatever major changes are needed in your own life, or whatever adjustments you need to make to your longer term plans, the options should be reaching their own finale.

The other bigger picture factor at work here is that the Sun and Mercury are also heading for their own big moment, as the two will make an exact conjunction also at the end of next week, in fact just one day after the Jupiter – Pluto.

We have Sun – Mercury conjunctions about 6 times a year, three when Mercury is direct (known as the superior conjunction) and three when Mercury is retrograde (known as the inferior conjunction). These alternate, so the last inferior was 9 October and this one looming on 28 November will be the superior. It will fall at 7 Sagittarius and I’ll be talking more about this next week, but it amounts to the same kind of themes that we experience when Mercury turns direct – understanding, revelations, news, information etc that make a difference.

The next grouping is Venus and Mars both reaching 12 degrees of their respective signs and therefore both meeting up with whacky Uranus along the way, Mars by challenging aspect and Venus by the harmonious trine, ie both in earth signs. The Venus – Uranus coincides almost exactly with the Lunar Eclipse –

The astrologically and astronomically sharp eyed may wonder why Venus and Mars are themselves not in aspect. Surely if they are both at 12 degrees and two signs apart they should be making the harmonious sextile?

Yes, they should! Venus with her annual cycle moves twice the speed of Mars with his two year cycle, so should not only be catching up but also overtaking. But Venus is heading for a retrograde loop which happens only once every 19 months – will switch direction at 26 Capricorn on 19 December – and is therefore already slowing down. The overtaking bit doesn’t quite happen.

However, Venus and Mars are in sextile for the whole of November and the first half of December. They’re like two trains travelling on parallel tracks but they just … don’t … quite … line up to perfection. They then start to drift apart as Mars steams on ahead through the whole of Sagittarius and Venus turns retrograde, but she’ll catch up again and the real union happens mid Feb when they meet up at 16 degrees Capricorn.

In the meantime this is symbolically interesting in itself. As they’re known together as the love planets it’s a clear showing, for example, of a relationship being beautifully on track but then on hold for Christmas and going into the New Year, and then reunited in February. This can apply to any relationship, not just a romantic one, and also to a money making or work project. Either way, take the longer view.

Also note the Mixed Reception of Mars in Scorpio (Pluto’s sign) and Pluto in Capricorn (Mars’ sign of exaltation). Deals and exchanges can be done, and out in the world that especially includes those in positions of power. Nazanin?

Love triangles or rocky relationships are more complicated, especially as unpredictable “all change” Uranus is involved – expect the unexpected twist in the tale – and also because we now enter Eclipse season, which happens every six months. The last ones were in May/June.

Eclipses occur when a New or Full Moon is also conjunct the Moon’s Nodes. The North and South Node are not heavenly bodies, they are the imaginary points at which the Moon cuts across the Ecliptic (from which we derive the word Eclipse) which is the apparent path of the Sun’s motion as seen from planet Earth.

In traditional astrology the line of the Nodes (always exactly opposite each other) symbolizes a dragon. The Sun and the Moon (the Lights) are the eyes of the dragon, and the dragon “eating” the Lights refers to the phenomenon of eclipses –

There is often a flavour of death/rebirth symbolism – changing colours, the light disappearing and coming back on again.

If you have planets or Angles at or close to the Eclipse degrees, then be on the alert for key developments in any situation that is about change, and establishing a new order. It may not be easy but when the shadows lift a new landscape is revealed.

When I say “close to” I usually mean within 2 to 3 degrees but with Eclipses the orb tends to be bigger, so allow up to 5 degrees, but the tighter the aspect the more important the planet/Angle in terms of indicating life events.

Finally the Sun is also on the last leg of the annual journey through Scorpio. If you have your own Scorpio planets, or if you think about others who do, you’ll recognize the hallmarks of this sign – determined, forceful, thorough, intense, passionate, resourceful, sometimes just plain difficult and bloody minded. So whatever you want to achieve in the immediate future, especially something of the “against all odds” variety or which is linked to reinventing yourself, take a leaf out of Scorpio’s book and go for it.

As we tip into next week the Sun enters the next sign of Sagittarius in the early hours of Monday morning, followed by Mercury on Wednesday, so I’ll be talking a lot more about this sign over the next few weeks,

Until next time, with love from Greece