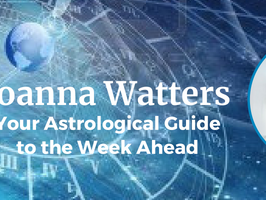 “The pessimist complains about the wind: the optimist expects it to change: the realist adjusts the sails“

Hands up anyone who’s got planets or angles at 19 degrees – of any sign? (Me!) As you’ll see from all the aspects listed this week no less than five planets are at this degree and it’s these five that make up this week’s activity. No other degree is in the news until we get the next Full Moon, at 26 Sagittarius at the very beginning of next week. More importantly, these five planets involve or play into the two major aspects that are the backdrop for the whole year. Here’s the sequence –

So the aspects being formed this week and early next week are the middle ones of these series of three, as both Jupiter and Saturn are now on their retrograde journeys, and Neptune is “stationing”, stuck at traffic lights at just under 19 degrees in readiness for turning retrograde on 21 June, the day of the Summer Solstice.

Look back to the second half of January (the first aspects of these two series) and see what was going on for you then. I personally don’t have to think very hard. January was the pits. It was pouring with rain (Neptune), the only expat (Jupiter) bar/restaurant usually open for the winter was closed for refurbishment (Saturn), and I was struggling emotionally. I would’ve sold my soul to have my sister back. It was like groping my way through fog and, even as an astrologer, it was hard to imagine things ever changing again.

But they do, and they did. It took a lot of work in terms of reaching something close to acceptance, part of which was accepting that the pain of our biggest grief never leaves us. Some things are not healable. I know several people who are going through similar experiences. On a more positive note the combination of Jupiter and Neptune are beautiful for “sea change” – the process of meaningful transformation and life enhancing lessons and experiences that bring about a new perspective, understanding and connection to our soul’s identity and purpose.

From the soul searching to the practical, this week is likely to cover the whole spectrum, and we start at full throttle with the Sun lining up opposite Jupiter –

This is a classic aspect for being hugely busy, possibly overdoing things or taking on too much, but at least it’s doing that are either fun, good for us or good for others. Help and generosity are usually in abundance with Jupiter, even by opposition. This is also a good aspect for planning for the future, weighing up your options and making choices.

In terms of list ticking this should be a productive week, as there’s a lull before all the planets pile in together, starting early on Friday with Mars being the active agent and then Mercury taking over throughout Sunday. Here’s the sequence –

Mars is the more difficult picture as he’s currently in his sign of “fall”. Mars is the action planet but Cancer is a cautious and introspective water sign, and this combination is known for being indirect or unassertive. The opposition to Saturn in particular is something of a road block. So no matter how much you may want to do something there may well be a waiting game involved or reasons why something can’t happen at this particular moment. With so many planets converging these pictures also indicate situations that involve many individuals or conflicting factors. Even if a tricky or emotional issue is resolved in terms of decisions this is unlikely to go down well with everyone. It pays to remember that you really can’t please all of the people all of the time. Look for the best possible solutions and be awake to anything that smacks of emotional blackmail.

Mercury repeating the picture at the weekend suggests that events unfolding at the end of the week (Mars) are unlikely to be cut and dried, there is more to come, especially in terms of further discussions, more information or heart to hearts. Certainly if you’re involved in anything emotionally painful, such as hurt in a relationship or a breakup, there’s a lot of ground to cover. Whether this applies to you personally or to someone close to you, or even in a business matter, also look out for themes of clinging on to someone or something for the wrong reasons, such as resistance to change or being unforgiving. Sometimes we have to unhook those Crab claws and simply let go.

As we go into next week we start with the Full Moon, which I mention here as this will have been exact by the time I send out next week’s blog –

This really feels like a positive light at the end of the tunnel, especially falling conjunct (within 7 degrees) Jupiter who is powerful in his own sign. No matter how tricky, claustrophobic or tiring the end of this week might be this Full Moon is the floodlit path to the future. It may be taking a completely different shape from the one you’d envisaged or expected, or it may be in the shape of blessings in disguise, but it’s bursting with optimism and possibilities.

Jupiter is the Greater Benefic as stated earlier, always intent on revealing our path of good fortune, but he’s also the liberator. What comes to light under any Full Moon can be or seem crazy but a Sagittarian/Jupiterian Full Moon can remove the blinkers, reveal new options, escape routes and create the freedom needed to pursue the things that matter to you. You may experience a feeling of being off the hook. Any new faces coming into your life at this time are also likely to be people that know how to make your world a bigger and better place. And anything to do with holidays, travel, learning, exploring or breaking with routine gets a huge tick.