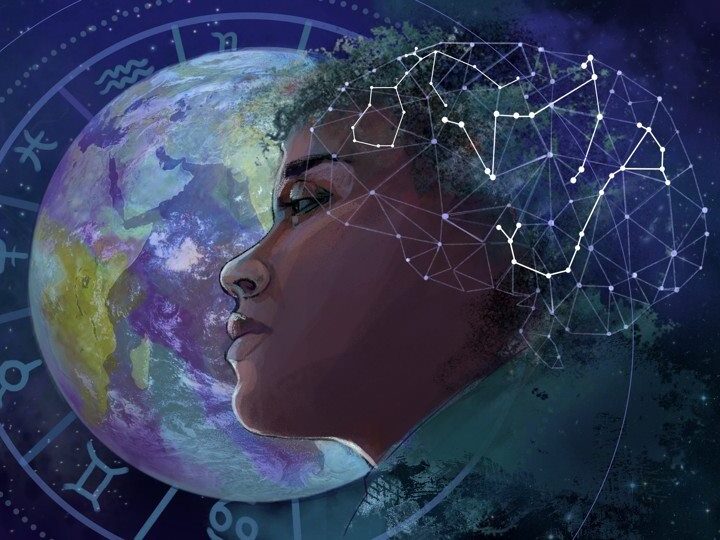 “I love listening to new stuff, at home in LA I always have the radio on to hear what is happening.”

“You are only a young talent, but we don’t know how old your soul is.”

Mercury is retrograde three times a year for three weeks at a time, and it’s always a relief to get through these somewhat tortuous times. Here’s a recap of Mercury’s meandering journey over the last few weeks –

Rather relieved to see the back of this court case so let’s just wrap this up astrologically. A few weeks back I wrote about how you can see someone’s life events in the horoscopes of those closest to them, and in that respect there is stunning synastry between Johnny Depp and one of his key lawyers, Camille Vasquez. I wrote that I thought this case would a feather in her cap. As it turns out that was an understatement. An article in The Independent last week reported that it’s catapulted her into fame.

Should have stuck to that, but got sidetracked last week when looking at how Mercury was poised to turn direct at 26 Taurus which is the exact position of both Johnny Depp’s and Amber Heard’s Venus, and also his Mercury. From last week –

It will be an important piece of astrology too for the Johnny Depp (Gemini) and Amber Heard (Taurus) case, as deliberations started last Friday. Depp has Mercury and Venus at 25/26 Taurus and Amber has Venus at 25 Taurus so I would definitely expect verdicts to be announced as we approach Mercury’s turning point and I would expect no clear “winner” as they have the same astrology going on.

So the “when” was clear as the verdict was in fact announced within 24 hours of Mercury’s turnaround, but I still think it was impossible to say, just from the Mercury, which one of them would get the favourable outcome. I think I underestimated Depp’s major life event of his 2nd Saturn Return (23.05 Aquarius) – an event that we all experience every 29.5 years and which I covered in depth a few weeks ago. His Saturn is the ruling planet of his marriage house, the 7th, is also posited in the 7th House and is a “dignified” Saturn – ie Aquarius is one of the signs that Saturn rules.

Saturn has just turned retrograde at 25 Aquarius so will come back over Depp’s natal Saturn again, turn direct in October and come back for the third and final time in January. So he’s got a long way to go in terms of coming to terms with this whole episode or dealing with any repercussions. It’s quite possible that he will also start a new relationship in this time frame.

Note to self and students, it’s astrologically frustrating trying to do predictive work in relationship stuff if you don’t have the time of birth, as we don’t for Amber. We therefore don’t have that super sensitive Me v You horizon of the Ascendant – Descendant but it will be fascinating to see what this is in her chart if a time of birth is ever given for her.

Mercury is the story teller, and an impish one when wearing his Trickster hat. Textbook definition when retrograde is “problems with communication” and everything that comes under that umbrella.

My favourite story happened last week when I was sent a message inviting me to a surprise birthday party for a very good friend. I wrote back explaining that I probably wouldn’t be able to make it because of running my groups, and also said … um, I think you’ll find that his birthday on the 4th, not the 3rd? When you’re an astrologer knowing birthday dates is pretty sure territory!

The message came back a while later that she’d been asked by two other friends in our circle to arrange this, so they had both got the date wrong, but by the time she’d got my answer she’d already invited everyone and people were confirming. So it was left that our Gemini friend would have two birthdays, how hilarious for Mercury’s tricks and for someone born under the sign of the Twins.

Remember the story about the Taurus girlfriend who lost her cash card in the ATM? This story continued to be textbook. Her card arrived last week, on Friday morning she went back to the cash machine armed with a new code to activate it …. Code didn’t work. No choice but to go into the bank, which of course is in the main town and 20 minutes drive away. We’re having an early heatwave here, on top of Covid regulations still about how many people are allowed into the bank at one time, so she had to join the queue standing in the sun.

One of the points on my Mercury turning direct again list is , “The right person appears to deal with the frustrating problem beyond our own expertise”. Mercury turned direct local time 11.01. At 11am a member of staff came out to talk to those waiting, asked my friend what she needed, she explained, he whisked her inside, took the card off her and sorted it. Done.

I’ll repeat the other themes of Mercury turning direct at the end of the blog, especially as he continues to play a major role again this week –

The trine to Pluto is important because this is the third and final combo in a series of three, each one at 28 degree –

Pluto himself is about endings so this a finale in more ways than one. It can be of the no going back kind, or it can be about wrapping up any matter that’s been claiming your time and attention over this period of time. This will apply especially to you if you have planets or Angles at 28 Taurus (or opposite sign of Scorpio) or 28 Capricorn (or opposite sign of Cancer).

Mercury then gets back into his own sign of Gemini and this time just keeps picking up speed without looking back.

The fast moving personal planets of Sun, Mercury and Venus all catch up with the slow moving outer planets once a year and this week it’s Venus’ turn to catch up with Uranus who’s now reached the middle degrees of Taurus –

This is an extremely lively combination. Venus is dignified in Taurus, her own steady sign of Fixed Earth, but Uranus in this sign is the ground shaker. Venus is the love planet and rules everything to do with romance, sex, pleasures, enjoyment, money, girlfriends so putting all of that together with Uranus can swing either way.

The outer planets are double sided so Uranus can be surprises of the wonderful kind, excitement, spontaneity, doing things differently, embracing the unusual, some healthy risk taking, things happening when and where you least expected, such as chance meetings or introductions. Uranus rules groups and along with Venus is brilliant for a whacky mix of women coming together – bring on the tarot week, arrivals on Wednesday!

The flip side to Uranus is the shock factor, the thing you couldn’t possibly have seen coming, the x factor that upsets the best laid plans, the rug puller and those wtf moments. He’s rather fond of antics and drama. Uranus also rules splits and is therefore the divorce planet, or the sacking planet.

Which inevitably leads me to Boris …. again let me start with a recap (section in italics) from last week –

I said a while back that I thought May was a really dodgy time for Boris because of the huge (once in a lifetime) transit of Uranus the rug-puller over his Jupiter (the fun planet, partying) which is at 15.45 Taurus, smack opposite Neptune 15.25 Scorpio (the planet that rules the booze and also deception).

The Sue Gray Report was published in full on the UK government website last Thursday 25 May, coinciding with the first Uranus transit and the middle retrograde Mercury transit. He’s definitely in trouble but will he hang on by the skin of his teeth? Here’s the full sequence –

Frankly it’s a miracle that he’s still in office and the middle of June could easily bring a vote of no confidence. We’ll see if that’s wishful thinking….

As it turns out the vote of no confidence has suddenly (Uranus) sprung arms and legs, and things are moving fast. Regardless of what I personally think about him I just don’t see how he can survive this astrological picture. There have also been huge rumours about Carrie having an affair with Zac Goldsmith, which would also explain a lot in terms of this rocky picture, but she was at his side at the Jubilee celebrations. I didn’t watch any of it but I’m told that Bojo was booed, and that the booing was edited out in later news broadcasts.

Otherwise look out for a key female character being in the headlines at the end of the week, or any eyebrow raising news within your own circle or family.

I’ll leave with you a reminder of Mercury’s role as he switches from Trickster to Magician, and a reminder that Mercury is the puer eternus – the eternal youth, the Peter Pan of the zodiac, and nobody embodies that better than the legendary Tom Jones. Love his quotes at the top of the blog for awareness but especially for keeping his interest alive. If you want to embody Mercury then be curious, inquisitive, and take a genuine interest in other people and the world around you – that’s how to stay young!