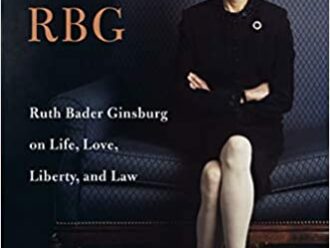 “I’m dejected, but only momentarily, when I can’t get the fifth vote for something I think is very important. But then you go on to the next challenge and you give it your all… There’ll be another time, another day.”

“So often in life, things that you regard as an impediment turn out to be great good fortune.”

Ruth Bader Ginsburg – b 15 March 1933 – associate justice of the Supreme Court of the United States from 1993 until her death 18 September 2020. She spent a considerable part of her legal career as an advocate for the advancement of gender equality and women’s rights, winning multiple arguments before the Supreme Court.

Who else could I quote this week but Ruth Bader Ginsburg? There is no recorded time of birth for her (on Lois Rodden’s databank or on astrotheme) so I’m afraid we don’t know the Ascendant, but she was a Pisces. Her Moon was another water sign of Scorpio, and with Sun trine Pluto (Scorpio’s co-ruler) there’s a double whammy of powerful Plutonic themes, fitting symbolism for this awesome woman who has left a breathtakingly significant legacy of change and achievement in her political work and feminism (Moon = women, Scorpio = power/regeneration. This combination is the Moon in her sign of “fall”). Ruth Bader Ginsburg made a lifetime’s work out of addressing the power and gender imbalances and abuses so deeply rooted in society, she was a champion of peace, human rights and true equality.

Rectification is when, having no time of birth, you let the astrology guide you to a workable horoscope instead of the other way around. It’s a very skilled and time consuming area of craft. But in Ruth Bader Ginsburg’s horoscope Pluto is found in the third water sign of Cancer, so my first guess is that she was born later in the day as this would move her Moon to a later degree of Scorpio, creating what is known as a Grand Trine – when three planets all align with each other in the same element (in this case the three water signs), creating the shape of an equilateral triangle. In turn this would create another major aspect pattern called a Kite, as the 3 planets in the Grand Trine (Sun, Moon, Pluto) would then all align with Jupiter too. This aspect pattern isn’t always easy but I’ve often noticed that it features in the horoscopes of those who have a huge mission in life. And Jupiter is the planet of protection, justice and all things legal, this lady’s area of work and expertise.

Part of her legacy is her words, and there are many thousands to choose from, but I’ve selected the two quotes above as she was known for her “turning rejection into opportunity” approach, for turning setbacks into a waiting game, never giving up and always waiting for the next chance. This is a major hallmark of Plutonic types, continually being able to reinvent and regenerate themselves, to view change and progress as a transformative process rather than an overnight sensation, and to have the patience to see things through to the bitter end. They don’t forgive easily either! As one of my Scorpio friends says, “Oh I can bear a grudge”.

Forgiveness/revenge issues are the Plutonic flipside. But when the good side shows, it’s very, very good and describes the kind of formidable qualities that will stand us all in good stead in these strange times. When we’re not able to live life in the way that we once would have done, in the way that we’d got used to and probably taken for granted, we have to reinvent ourselves, constantly looking at how to do things differently and in the best possible way available to us. I know many people who actually benefited hugely from the lockdown earlier in the year, especially with regards to changing old mindsets. Silver linings etc. We can still achieve, against all odds.

Psychological research shows again and again that one of the dominant hallmarks of survival and success is resourcefulness. Brains are actually less important than adaptability, including the ability to pick ourselves up after a disappointment. In some ways this is a very reliable indicator of good mental health. In other words, it’s normal to feel dejected and despondent when things go wrong, but as Ruth Ginsburg says, she experienced these feelings momentarily. She quickly let it go, or shunted it to the back burner, but moved on to the next thing.

If we allow ourselves to feel devastated when things go wrong, that’s when the trouble starts. If a setback overwhelms us and overshadows everything else in our life for weeks on end (excluding bereavement), then it is probably disproportionate to the event. And when something is disproportionate then it usually means that it’s about something else, some trigger for old trauma.

This week look out for these triggers or for any kind of emotional, hidden or disconcerting issues as Venus the love and money planet is now aligning with the four major planets that are hogging the limelight at the moment – Jupiter, Neptune and Pluto this week, Saturn at the beginning of next. And just to make it even more interesting the aspect being formed is the quinqunx, the awkward by name awkward by nature alignment that happens when two planet are exactly five signs apart –

This is said to be a minor aspect but it’s usually not minor by impact. When planets are five signs apart they have absolutely nothing in common so it’s blind spots, ne’er the twain shall meet arguments, mismatches and compatibility issues, illnesses that are hard to pinpoint or treat, concerns that are difficult to deal with in a straightforward way, other people – or us – acting out of character, making mistakes or misjudgments through tiredness or wrong information – and so on. The most important message is to stand back. If two and two are making five then things are not adding up for a reason. And it will be a reason that may take a while to come to light. This applies to money matters too. Ask HSBC.

Venus in Leo is a beautiful placing in many ways, the love planet shining in the Sun’s sign, but the flipside – always a flipside to everything! – is that it’s a combination that thrives on adoration, respect, loyalty, recognition and appreciation. All of these things might be in rather short supply this week! The other message is not to take it personally. We can’t possibly fully understand how someone else’s mind is really working, so live and let live. Typical Leo characteristics include being brilliant at management and organization, but if we try to organize someone else right now then we’ll probably only get accused of being bossy and controlling. When your fingers itch to take over, sit on your hands. Focus on yourself instead.

In traditional astrology this is the Sun’s sign of “fall” – weakest sign. The Sun is “exalted” – strongest sign – in the opposite sign of fiery and ego driven Aries. Libra is all about partnership, including dependency, Aries is the trail blazing individual, thriving on independence. Interesting. There’s absolutely nothing like the wrong relationship to sap our energy, and nothing like co-dependency to change a once confident person into a wreck of their former selves. If there are clear imbalances in your relationship this is the week when they’re likely to start showing more clearly. But good Libran qualities are the way forwards – negotiation, cooperation, asking the right questions, listening closely to the answers, making mutually “good enough” agreements.

Bear in mind that once Venus clears all these hurdles her final aspect on the journey through Leo will be a harmonious trine to Mars next week. Venus – Mars positive combinations bode well for love stuff of all kinds, although bear in mind that Mars is now retrograde so there’ll also be some “re” themes – going back, reworking, rethinking, reconnecting and so on. I’ll be talking more about this next week.

The planet of communication is also finishing a cycle, through Libra, and again clashes with two other planets before changing sign –

Mercury is news – the winged messenger of the gods – so difficult aspects often point to bad news or things that throw a spanner in the works, especially when the “malefics” Mars and Saturn are involved. If you have to write something off, or if you realize that a project or plan falls into the bad timing category, then do so with the Libran quality of good grace rather than getting into a fight. Or have your say, even have a first division argument, but then let it go as this is the end of that particular cycle.

Mercury’s change of sign is especially important as, guess what, he’s heading for his next retrograde cycle and is going to end up spending a very long time in Scorpio/end of Libra. Here’s the timeline to come –

When you consider that Mercury at full speed can whizz through a whole sign in about two weeks this gives you an idea of how drawn out his retrograde phases really are, it’s the long and winding road that upsets even the most carefully laid plans. So be careful what you agree to long term and build in flexibility wherever you can. Some of this picture will almost certainly relate to the revising/imposing/lifting of various lockdown measures.

So it’s quite a complex week but there are other factors at work that suggest that things are moving on in other ways. Firstly Saturn is “stationary direct”, sitting at 25 Capricorn in readiness for turning direct next Tuesday after being retrograde since 11 May. This is a major turning point for the better as the “get it together” planet in his own sign links to getting definite about anything in the work, commitment and responsibility departments. This can take the shape of either endings (wrapping things up, your duty is done) or beginnings (the wait is over, sign here). Again I’ll be talking more about this next week.

And on the subject of planets turning direct after spending months in retrograde motion a reminder that Jupiter turned a week ago at 17 Capricorn. This month’s Moon – Jupiter conjunction falls in the early hours of Friday, so it will be beautiful to see in the night sky on Thursday evening if you have clear skies, and symbolically it carries weight as this is the first conjunction with the Moon since the turnaround –

Again on the subject of “fallen” planets – ie planets in their signs of fall – this is Jupiter’s and it’s been a long struggle since he arrived in this sign last December. Both Jupiter and Saturn will take a while to pick up speed, and they’ll both move on into the next sign of Aquarius in the middle of December, but this is the beginning of the home stretch. Pay close attention to what comes up for you throughout this week, bigger issues now taking shape may well prove to be extra important for the rest of the year, and don’t forget to make a wish on Thursday night or Friday morning – Jupiter loves optimism!

Eclipse Stories, the Scorpio Journey & the Importance of Being Courageous
November 15, 2022