“Nothing in life is to be feared, it is only to be understood. Now is the time to understand more so that we may fear less.”

First of all apologies for the error last week re the New Moon. We were having a freak heatwave – it hit 38 degrees, hottest May for 50 years – and I think my brains were addled! I never thought I’d hear myself say I was glad not to have students here, for their sake. One of the reasons I’ve never even attempted to run courses in July and August is because of the heat, too hot to think in the summer months. And as ever with soaring heat here it ended as fast as it arrived, with sudden downpours and temperatures dropping 15 degrees overnight. Back to normal for May.

So the position I gave of 9 Virgo was for the quarter Moon which is this week (Saturday 30 May) and what I should have given was for the week before, New Moon at 2 Gemini (Friday 22 May). I still can’t believe I wrote that without instantly noting the error as of course New Moons are always in the same sign as the Sun (Moon conjunct Sun) just as Full Moons are always in the opposite sign (Moon opposite Sun), the moment when the Moon is receiving all of the Sun’s light.

This week has a very different mood as the frenzy of activity in Gemini is easing up, especially in terms of Mercury who has only one minor aspect to make to Jupiter before moving on into the next sign, and who then repeats that same minor aspect to Saturn. And in fact Mercury’s sequence here is the only astrological activity for this week –

Both Jupiter and Saturn have only just started their retrograde journeys which doesn’t help but the really tricky bit in this picture is that the quinqunx – formed when two planets are exactly five signs apart – is a minor aspect but it’s not always minor by impact, being awkward by nature as well as by name. Any two signs that are five apart have nothing in common – they don’t share an element, a mode or gender. In these examples –

At a symbolic level then this is an alignment that signifies blind spots, deception, mismatches or the things that confuse us or even broadside us. As Mercury the planet of all communication is involved this can relate to information in all its guises, and questions around its accuracy or what is being withheld. It will almost certainly feel as if Mercury is retrograde, especially as Venus really is retrograde in Gemini, Mercury’s sign.

It’s the arguments that nobody can win, it’s the questions that have no answers, it’s the decisions that can’t yet be made or it’s the frustration of dealing with those who twist the truth. It’s the prickly subject between you and another that you’ll never agree on. And as Marie Curie wrote all those years ago, not being able to understand something is a major fear factor, a point that seems especially important to bear in mind as the world goes through, or tries to, such tricky transitions.

It’s also the scenario of one rule for us, one rule for another – and in the UK that’s glaringly obvious in the headlines of the Dominic Cummings story that is understandably creating such outrage and yet again showing up Boris Johnson’s lack of clear leadership. By comparison Jacinda Ardern was also in the news as an earthquake hit while she was being interviewed on television. She hardly batted an eyelash. Her hero status just went up another huge notch. At a personal level the message is not to invest in anyone or anything you don’t completely trust.

Traditionally this aspect is associated with illness too so it has to be said that it’s not an ideal picture as far as relaxing lockdown rules goes. Stick to your social distancing guidelines and if you have the option to send your children back to school it would make sense to wait a while longer.

Mercury’s change of sign is important as he’s going to be here for a long visit. Yes, here we go again with the next retrograde cycle looming, but the turning point is a few weeks off as yet (18 June). For now just note that Mercury is retrograde three times a year and always for three weeks at a time and always starts with a slowing down period. Instead of whizzing through Cancer he’ll be doing the scenic route, and will be in this sign for ten weeks from 28 May to 5 August. To illustrate how slow this long loop backwards will be, compare Mercury’s recent journey – through the whole sign of Taurus 27 April to 11 May (2 weeks) and through Gemini 11 May to 28 May (just over two weeks).

I’ll be talking more about this during the next few weeks but for now Mercury is still pretty much at full speed so make the most of it. Get ahead wherever you can, and put any important issue at the very top of your to do list. It’s becoming increasingly obvious, from events in the world as well as from the unfolding astrology, that we’re most unlikely to emerge from lockdown measures with billowing sails. But virus or no virus, getting ahead with stuff before Mercury’s turnaround is always helpful.

The slower moving planets have long retrograde journeys so Jupiter and Saturn, who both switched direction in the middle of May, won’t turn direct again until September. This is part of the picture that suggests that the summer is going to be a big non event as far as travelling and holiday plans abroad are concerned, and they also symbolize the risk of “going back” to more restrictions.

Of more immediate interest, as by now all followers of astrology are aware, is the fact that faster moving Venus is also currently retrograde, which happens only once every 18-20 months. So the love and money planet is taking us on a mystery tour that may yet have some magical moments in it, especially if you have planets between 5 and 22 Gemini or the opposite sign of Sagittarius.

For me this Venus story started with seeing the first photo of a chained up Lola, the dog I’ve now rescued, on the day that Venus opposed my natal Venus of 14 Sag for the first time. Every other animal I’ve rescued in Greece over the last 25 years has simply either been found by me or handed over to me. This was the first time that I found myself up against logistics (another island), the resulting paperwork (she couldn’t travel without being chipped and vaccinated) and costs. But I didn’t care because I was on a mission, it took two weeks but Lola is now totally settled in my home and in my heart. It’s hard to remember what it was like without her. 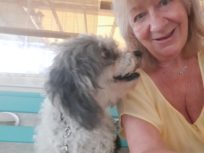 I count this rescue as one of the best things I’ve ever done. So Venus being retrograde didn’t translate into no love, but a hard won love, something I had to fight for and which wasn’t just handed over to me. And I didn’t do it alone. Venus = women, Gemini = two (the Twins) who naturally rules the 3rd House of siblings and it was the teamwork with my sister’s friend Rachael on Cephalonia that made things happen. Rachael said she was sure that, “Sue put us together for this job”, and another astrologer friend of mine Lynne Ewart wrote to me, “I have the strongest psychic feeling that she was sent to you by Venus ..love..from Gemini… sister. I’ve had so many stories of sister gifts.”

Next week Venus will be in the headlines. Whether you are attached, single, it’s complicated …. we have to get through this week but then for all love matters draw a big heart around the evening of 3 June. This is when we will have what’s called a “cazimi” Venus, when she’s exactly conjunct the Sun, and it happens only once every ten months. This is the middle of the retrograde journey, when Venus is said to draw enormous strength from the heart of the Sun, bringing illumination, love and passion of the extra powerful and unmistakable kind.

And this doesn’t apply just to partners and lovers but to all our cherished relationships and all other Venusian concerns such as money, pleasures and sweetness of all kinds. Get ready for the theme of seizing your moment and I’ll be talking more about this major event next time,