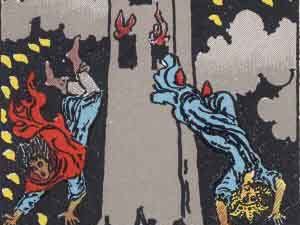 “Worry pretends to be necessary but serves no useful purpose.”

“Negativity is never the optimum way of dealing with any situation.”

Mercury will turn direct just as we move into this coming Sunday so we’re on the home stretch. More info on this event further on in this blog but for starters, in technical terms, this means that Mercury is now “stationing”, appearing to come to a standstill as he ends the backward loop and then starts moving forwards again. To put this in perspective Mercury starts the week at 13 degrees Aquarius, and will turn direct at 11 Aquarius, so is moving only two degrees in the whole week.

When you bear in mind that Mercury at full speed can whizz through a whole sign of 30 degrees in about two weeks this gives you an idea of how slow and drawn out his retrograde phases really are. It’s the long and winding road that sends us on a scenic route, upsets even the most carefully laid plans or shakes the most deeply held convictions. It’s the missing pieces of a puzzle, it’s uncertainty or secrecy, it’s the grappling with understanding or attempting to problem solve the things beyond our expertise, it’s the thing we wish we’d never done or wish we had done – you can’t win – but now it’s a time for stillness.

Starting at a universal level Mercury now coming to a standstill in Aquarius, sign of the collective – everything from mankind, to communities, social groups or audiences – is a clear and obvious symbol for the revising/re-imposing of various lockdown measures.

Melbourne is in the news after officials found 13 cases stemming from an unfortunate  worker at a quarantine hotel. This is their third major lockdown and it will last for five days, designed as a “circuit breaker” to combat the highly infectious new variant. The Australian Open tennis tournament continues but without an audience, going from 30,000 visitors a day to none.

The phrase “circuit breaker” is brilliant and one with which we can all identify. It’s especially apposite here right now as this weekend I learned that we have three cases in the next village. A guy who had tested negative returned from Germany and then developed symptoms when he got home, passing the virus on to his parents. We don’t know yet if this is the new variant or not but it’s a time to emulate that stationing Mercury – bring life to a standstill as much as possible and stay put.

New Zealand is also in the news as Jacinda Ardern again swings into immediate action, ordering the country’s biggest city Auckland to go into a three day lockdown after the discovery of three new local cases. Let’s hope that this decision will continue New Zealand’s success story. With a population of five million they’ve so far recorded just over 2,300 cases of Covid and only 25 deaths.

DIVINATION – ASKING FOR AN ANSWER TO A QUESTION

Last week it was also suddenly announced here in Greece that the age groups 60 – 64 and 75 -79 could receive the AstraZeneca vaccine. Reading that the vaccine wasn’t considered suitable for the age group in the middle of those ranges was enough to make me uncertain and given that I would normally not even make a dental appointment under a retrograde Mercury I decided against it for now.

Out of interest I turned a tarot card for this feeling. You can turn one card if you have a very clear “yes or no” question. The first time I ever did this was for someone wanting to know if she was pregnant, on the basis that she couldn’t be a little bit pregnant, she either was or she wasn’t. She turned the Page of Cups, the conception card. She was.

For the question should I have the vaccine I got the 10 of Swords. This is a dramatic image of a guy lying face down with ten swords impaled along the length of his body. Mmm, that will be a no for now then. I noted the time that I turned the card and did the horoscope for the same moment. It yielded a Cancer Ascendant and therefore the question was ruled by this sign’s planet, the Moon, who was in Capricorn, her sign of detriment, in the 6th House (health) moving to conjunct Pluto (endings, wipeouts) in Capricorn. This was enough to suggest that this might not be the right vaccine for me so, using one of the retrograde Mercury guidelines of buying more time, I’m going to wait.

Things have gone suspiciously but expectedly quiet with regard to details about Alexei Navalny and Aung San Suu Kyi, other than the former is in prison and the latter under house arrest. Both represent the face of crushed democracy. So does the inevitable failure to vote Donald Trump accountable for inciting a murderous mob to violence, but am not even going there.

The situation in Myanmar however is reported as escalating and the hypocrisy of the military rule makes things even worse as journalist reports suggest that they don’t even see it as a coup but as an attempt to impose their own version of democracy. Their grounds are that fraud can be the only possible explanation of their dismal performance at the last elections, securing only 7% of seats. After all, it couldn’t possibly be the result of an increasingly enlightened and now furious public …

Saturn (authority) clashing with Uranus (rebellion) is the astrological “signature” for hundreds of thousands of protesters rallied against the military for the ninth day in a row. A crackdown across the whole of Myanmar has now started, which means the use of violence against citizens. Armoured vehicles now patrol the streets, hundreds of activists and opposition leaders have been detained, and so far this includes the arrest of five journalists, and anyone protesting is now being threatened with jail sentences of between 3 and 20 years.

A statement signed by the EU, the US and the UK said: “We call on security forces to refrain from violence against demonstrators, who are protesting the overthrow of their legitimate government.”

These two planets both rule Aquarius, Saturn being the traditional ruler and Uranus being the modern co-ruler –

We currently have the Sun, Venus, Jupiter and Saturn in Aquarius as well as a stationing Mercury. This line up along with the rulers of this sign in major conflict reflects that we’re living through times in which our world view has never been so dominant or so important. It’s also the ongoing battle of knowing that we’re all part of an international pandemic problem yet still needing to find ways to make our individual lives work as best as possible.

I chose Eckhart Tolle for this week’s quote because he’s an Aquarian, it’s his birthday tomorrow, and his Sun is in aspect to both his natal Uranus and natal Saturn. He embodies that skill of combining objectivity and logic (Aquarius), whilst recognizing that the spiritual journey is intensely personal (his Mercury in Pisces).

I don’t think for one moment that he means don’t plan ahead for the family shop or put next week’s appointments in your diary. It’s more about distancing ourselves from debilitating depression (too much past) or anxiety (too much future) so that in turn we can simply be fully present in the moment.

This is a week when those thoughts may well be worth hanging on to. This huge aspect is important in our “now” because both planets are slow moving and they align by square (friction, difficulty, tension) only once every 22 years. At this point I’d like to do a shout out to Jamie Partridge whose website is an invaluable source of this kind of data, and over the years has saved me hours of research time, either for checking my own facts or for finding information that I needed and didn’t know at all –

This aspect is also troublesome because in addition to squaring up to each other, the two planets stand for opposing principles, Saturn being the rule maker and Uranus being the rule breaker. It embodies and underlines the themes of worldwide struggle – whether it’s containing the virus or recognizing the political message of no change without conflict. As this aspect has been “applying” for some weeks now, moving towards an exact alignment, it’s already clearly shown as civil unrest, so far in America, Myanmar and Russia. Note that Putin has Saturn square Uranus as a natal aspect.

When I say match I mean within 2 – 3 degrees either side, but the closer the match the more important the aspect and therefore the more significant life events it indicates. You should also include the other two Fixed signs of Leo (opposite to Aquarius) and Scorpio (opposite to Taurus).

Personal themes to look out for will have the unmistakable hallmarks of the same kind of crazy conflict also seen out in the world – one person blocking another, one person wanting to leave, the other wanting them to stay, upheaval such as moving house or changing job, being blocked from doing particular things because of lockdown measures, conflict with those who take risks who then put you at risk, anything unexpected that comes hand in hand with hard work or loss, having to deal with those who are difficult or unwilling to negotiate, anything that amounts to bashing your head against a brick wall, anything that demands facing up to a reality and so on.

Not easy, but this combination is like The Tower in the tarot. Something disintegrates, something can no longer continue in its existing structure, something’s gotta give. And as this first square forms with a stationary direct Mercury it indicates a tipping point, in our own decisions or in the shape of decisions that are made for us by force of circumstance.

This is Venus’ last aspect before she also moves into Pisces next Thursday so look out for themes of closure. This can obviously take many different shapes but again as this finale is coinciding with a stationary direct Mercury the time is right to agree to disagree, have your say over anything that’s been important in recent weeks but then let it drop.

Half hearted affairs or relationships struggling on for all the wrong reasons are probably on their way out. Be clear about where you’re able to compromise and where you’re not, and why.

The general theme at these times is always Mercury getting back to his office, closed sign flipped to open, ready to start talking and problem solving again. In itself this is Good News, and the turnaround can also show in our attitude, switching from negative to positive, from powerlessness to “can do”. Also note that events that started to unfold around three weeks ago, or decisions that were made or not made, are now likely to reveal their full significance or consequences.